Blagojevich Off To The Slammer 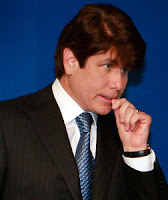 No big surprise that former Illinois Gov. Rod "Let's Make a Deal" Blagojevich was convicted by a jury on multiple counts of corruption stemming from his scheme to literally sell the U.S. Senate vacancy left by Barack Obama in 2008. The jury found him guilty on 17 of 20 counts, which could mean a long, long time in jail.

Now that bushy Blago is heading off to the slammer, we have to admit a certain melancholy at his imminent jailing. We'll miss his constant but obviously phony claims of innocence, and his loopy appearances on late night TV where he never seemed to mind being the butt of jokes. But who knows? Maybe there's a book or hair products endorsement in Blago's future.
Posted by Hackwhackers at 8:57 PM