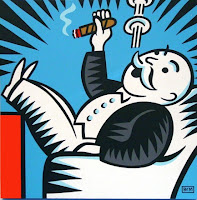 A huge gap in income between the middle class and corporate executives is the most extreme since the Great Depression. As this article in the Kaplan Daily notes, pay for executives since the 1970s has increased four-fold, while the average wages for all employees has remained nearly flat.

The article points out that in 2008, the top one percent took in more than 20 percent of the personal income in the U.S. Case in point is the executive compensation at Dean Foods:

"Over the period from the ’70s until today, while pay for Dean Foods chief executives was rising 10 times over, wages for the unionized workers actually declined slightly. The hourly wage rate for the people who process, pasteurize and package the milk at the company’s dairies declined by 9 percent in real terms, according to union contract records. It is now about $23 an hour."

Sadly, until shareholders and the public at large demand that executive compensation be brought down from the stratosphere, these plutocrats will continue on their merry way -- and the American middle class will continue to decline.
Posted by Hackwhackers at 9:31 AM