Quote & Cartoon of the Day

"[Rethug Senate Minority Leader] McConnell’s first brush with radical truth-telling came in October 2010, when he told National Journal that 'the single most important thing we want to achieve is for President Obama to be a one-term president.' McConnell quickly qualified his remarks, although he never quite apologized for them. Nor should he have. McConnell wasn’t articulating a radical new theory of politics. He was telling us how he and his party were already voting. Consider the dozens of elected Republicans who, at one time or another, supported an individual mandate for health-care reform, cap-and-trade for carbon emissions and tax cuts for stimulative purposes. Over the past three years, almost all of them have renounced their former views. Unless you understand McConnell’s argument, you can’t understand their actions." Ezra Klein, reaffirming the fact that the Rethugs will wreck the economy so that Obama gets the blame. Tom Toles' editorial cartoon in the Kaplan Daily strikes a similar note: 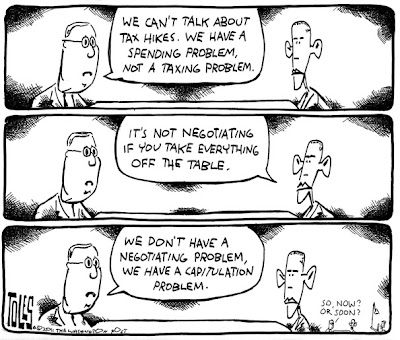 (BONUS: Check out Steve Benen's piece on how Rethugs define "compromise." Benen's description of Rethugs: "reckless thugs pretending to be a political party.")
Posted by Hackwhackers at 4:21 PM