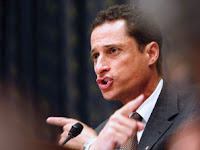 Well, it looks like Dem Congressman Anthony Weiner was lying all along about sending inappropriate texts to women. In a press conference this afternoon, Weiner admitted that he lied last week about Twitter postings that showed him in underwear, and that he had been guilty of "sexting" several females in the past months. While he didn't indicate that he was resigning, he can expect to lose his prominent spokesman position within the Dem House caucus. His "scandal" last week preempted the Dems' successful attack on the "kill Medicare" policy of the Rethuglicans. Worst of all, this has to humiliate his lovely new wife, Huma, a top aide to Sec. Hillary Clinton, and who apparently married beneath her. Sad all around.

(photo: "My integrity went that-a-way.")
Posted by Hackwhackers at 5:44 PM