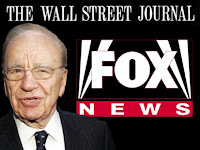 News Corp.'s unspeakably despicable mogul Rupert "Arrgh!" Murdoch possibly has both of his wrinkly tits in a ringer as a result of a burgeoning phone hacking scandal in Great Britain. The tabloid involved in the scandal, "News of the World," is part of Murdoch's News Corp. (as is Fox "News", the NY Post, and Wall Street Urinal in this country). The tabloid is the target of calls in Parliament for an inquiry into how cell phones of a murdered 13-year-old girl and victims of the 2005 terrorist bombing in London were hacked by a News of the World investigator. Rebekah Brooks, who was editor of News of the World at the time and is now head of Murdoch's News International, is the most senior Murdoch employee coming under fire at this time. Since the Murdoch empire is a family business closely controlled by Murdoch and his son James, one can easily imagine that the trail of soulless behavior leads right to their doorstep.
Posted by W. Hackwhacker at 3:05 PM