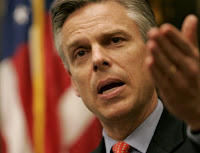 To appreciate just how far to the extreme right the Rethuglican / New Confederate Party has gone, one only need to hear yesterday's comments by former Utah Gov. and Ambassador to China Jon Huntsman. Ten years ago, Huntsman was considered an orthodox conservative; now, he's seen as a librul by the extremists who are dominating his party. Huntsman unloads on Hair Perry's successionist babble, Minnesota Loon Bachmann's fantasy world, and Mittens Romney's flip flopping to appease wingnuts. He won't win the nomination, but he may cause some Rethugs who haven't completely lost their minds to consider the situation they've created.

Ironically, the candidate least likely to get the Rethuglican nomination would be the most likely to defeat President Obama, since he'd draw a lot of independent -- and some Dem -- voters to his side. He's right when he says the current field of extremists are unelectable.
Posted by Hackwhackers at 10:01 AM