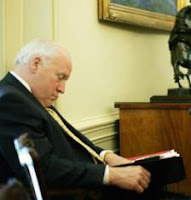 Former (Vice) President Dick "The Dick" Cheney's memoir, "In My Time," is making its appearance today, and from the initial snippets that have been released to publicize it, it's vintage The Dick: arrogant, delusional, unapologetic, and dishonest. His version of events often diverges from those of his clueless boss, Dumbya, especially surrounding the events of 9/11. Dumbya retold it as a "let's get them" moment; The Dick says Dumbya asked him what to do. The commercial plane shootdown order issued on 9/11? Dumbya says it was his order; The Dick says it came from him. It appears that The Dick's most cutting comments are aimed at Dumbya's two African-American Secretaries of State, Colin Powell and Condoleeza Rice. Under both, The Dick says the State Department worked at cross-purposes with the Administration. A true misogynist, he suggests that Rice was too emotional for the job (nudge nudge -- can't trust those weak wimmen!).

Well, The Dick is gone, but not forgotten. Some of his targets -- notably Powell and Rice -- haven't published their version of events, so there's time for setting the record straight with The Dick.

(photo: The Dick is shown developing material for his memoirs)
Posted by Hackwhackers at 9:17 AM