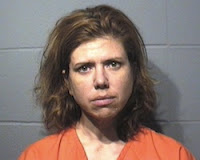 The skeezy sot pictured here, courtesy of the Columbia County Police Department (Wisconsin), is Columbia County Rethuglican Chairman Amber Hahn (or rather ex-chairman - man they move fast to bury their embarrassments). She was arrested after crashing her car -- with her three children inside -- while driving under the influence. As Wonkette points out, Hahn has been seen on Fox "News" as an anonymous "concerned citizen" railing against those darn teachers and their evil unions! She's a charmer.

UPDATE: Dammit! Just when you think you've gotten away cleanly, political karma kicks in...
Posted by W. Hackwhacker at 4:34 PM