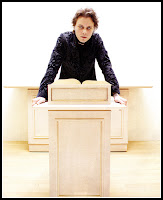 In a disturbing display of "American Taliban" fanaticism, a deranged man started shouting at President Obama from the audience at an appearance last night in Los Angeles. Before Secret Service agents could hustle him away, he shouted that "Jesus Christ is God," and "Barack Obama is the Antichrist."

With right-wing fundamentalist organizations attacking the President, it's not surprising that a Talibangelist would eventually show up at a Presidential event and disrupt it. What's especially disturbing, however, is the "Antichrist" label, which seems to be an end of times/rapture theme on the far right. For them, it constitutes a call to arms, with all the ominous implications for the President's security.
Posted by Hackwhackers at 5:42 PM