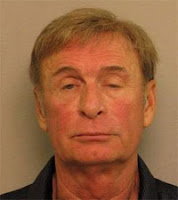 Tennessee residents can feel safe in knowing that their Rethuglican state senator Curry "Look Out, He's Got A Gun!" Todd carries a handgun wherever he goes. Unfortunately, as the sponsor of a bill that would make it legal for Tennesseans to carry guns in bars, "Got A Gun" was arrested for drunk driving with a .38 handgun stuffed next to his seat. The arresting officer noted that he was "unsteady on his feet, almost falling down at times, (and) was obviously very impaired and not in any condition to be carrying a loaded handgun.”

Clearly, this is a miscarriage of justice. Why shouldn't "Got A Gun" be allowed the potential of drunkenly shooting an innocent motorist who happened to get in the way of a bullet fired from his gun? After all, he left the bar without shooting anyone!

(photo: Your Rethug / teabagger representative: be proud!)
Posted by Hackwhackers at 11:48 AM