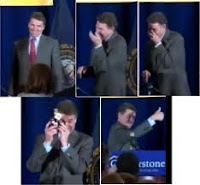 With cardboard pizza man and Rethuglican Presidential hopeful Herman "Herb" Cain flailing against charges of sexual harassment and campaign finance shenanigans, we don't want to neglect the other nuttiness that constitutes the Rethug candidate lineup. Last Friday, secessionist Texas Gov. Rick "Hair" Perry delivered what can only be described as a bizarre speech in Manchester, NH. Check out not only his flippant delivery, but his theatrical facial expressions. Either he just came from the dentist's office where he got a dose of nitrous oxide, or he was overserved at the event's open bar. Here's the evidence:

Yeehaw, y'all. Set up another round! I feel like punchin' somebody!! Where's my gun?
Posted by Hackwhackers at 11:48 AM