On a "Centrist" Third Party 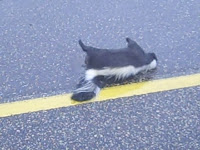 Some of the Beltway Kool Kids have recently been plumping for a third party candidate to run for president in 2012. The argument generally goes like this: we need a middle-of-the-road/ centrist who will bring the country back to a less polarized place, because the left and right are making a mess of things! Here are two takes on this "thinking," the first by Jonathan Chait:

"What... are we to make of third-party activists like [NY Times columnist and "Mustache of Understanding"] Thomas L. Friedman or Starbucks CEO Howard Schultz? They have a president who supports virtually everything they want—short-term stimulus, long-term deficit reduction through a mix of taxes and entitlement cuts, clean energy, education reform, and social liberalism. Yet they are agitating for a third party in order to carry out an agenda that is virtually identical to Obama’s. In a column touting the third-party Americans Elect, the closest Friedman comes to explaining why we should have a third party, rather than reelect the politician who already represents their values, is to say that such a party 'would have offered a grand bargain on the deficit two years ago, not on the eve of a Treasury default.' He agrees with Obama’s plan, in other words, but proposes to form a new party because he disagrees with his legislative sequencing."

"Some of my middle-of-the-road columnist friends keep ascribing our difficulties to structural problems in our politics. A few call for a centrist third party. But the problem we face isn’t about structures or the party system. It’s about ideology — specifically a right-wing ideology that has temporarily taken over the Republican Party and needs to be defeated before we can have a reasonable debate between moderate conservatives and moderate progressives about our country’s future...

In the meantime, a broad range of economists agree that America’s sputtering jobs machine needs a sharp and quick jolt. It is unconscionable that in the face of mass unemployment, Republicans continue to foil measures to spur employment, including an extension of the payroll tax holiday. How can conservatives declare simultaneously that (1) it would be a terrible crime to raise taxes on the rich in the long term, and (2) it is an act of virtue to raise taxes on the middle class immediately? Has class warfare ever been so naked?

...We need moderation all right, but a moderate third party is the one way to guarantee we won’t get it. If moderates really want to move the conversation to the center, they should devote their energies to confronting those who are blocking the way. And at this moment, the obstruction is coming from a radicalized right."

I can think of one case in which a third party could offer great value, independently of its policy positions.

We should take the time to search for alternative candidates. We don't have to wait for anyone to change the campaign finance system. We can simply refuse to vote for any candidate backed by big money. That denies power to the source of that money, bypassing the need for reform (and the lobbyists who would stop that reform because their jobs would be threatened).

There are some politicians who take very little money from any sources except individuals (in other words, they are not indebted to special interests).

In the likely event that no such candidate wins the primary for either major party, my strategy would require voting for neither Democrats nor Republicans. Other parties' candidates still appear on ballots. It does not matter which candidate, because that candidate will not win the election this time around. It's OK to vote for a goofball or weirdo.

If more people start voting for those outside party weirdos you see on ballots, it becomes more likely that sensible independent candidates will emerge in various elections. Then we can vote for those people. Also, that will pressure the two main political parties to adapt to voter preferences more than big campaign donors would like.

Why should we forget about the past harm that Democratic or Republican mainstream candidates done? That harm was not accidental; it was the result of both responding to lobbying and acting based on party ideology. We should assume that politicians of both parties will repeat some of their past harmful actions.

There's a saying: "In every democracy, the people get the government they deserve". We're getting abused because we choose the wrong representatives. It's our fault, and it's our responsibility to change that.

Thanks for your thoughts, Erik. This seems to be an emerging discussion. FYI, the gist of what you're saying was expressed in a column on December 17 by Steven Pearlstein, a Washington Post writer we greatly admire.