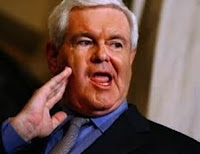 Now that right-wing gasbag Newt "Poot" Gingrich is temporarily rising in the polls, he's going to have to answer some questions about his connection with Freddie Mac starting from 1999. The Pootster would have us believe that Freddie Mac spent at least $1.6 milllion to have his advice as a "historian" (of what, sleazy politics?). Officials at Freddie Mac beg to differ with Poot the Historian. According to them, Poot was hired to lobby his former Rethug colleagues so that they would be more sympathetic to the company. Poot's story that he warned them about risky loans and a housing "bubble" looks shaky, too. We all know that the far right considers Freddie Mac (and sister company Fannie Mae) as causing everything from the housing market collapse to psoriasis, so Poot's connection with either one is potentially deadly.

Now for a walk down memory lane, here are some of Poot's greatest hits from the past, courtesy of Mother Jones.
Posted by Hackwhackers at 9:25 AM