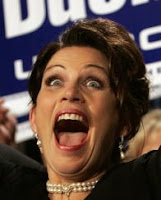 With only a few days left before next Tuesday's Rethuglican Iowa caucus, Minnesota loon Michelle "Crazy Eyes" Bachmann's Iowa campaign chairman has resigned and endorsed an even more extreme nutzoid, Rep. Ron "Race War" Paul. Kent Sorenson claimed that he had been thinking about switching allegiances for days. He apparently saw Crazy Eyes' chances dimming and decided to throw in his lot with fringe fanatic Paul, who has risen in the polls.

For a Party that supposedly values loyalty among its cherished "traditional values", these clowns make cannibals look positively tame.
Posted by Hackwhackers at 7:34 AM