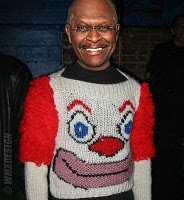 Today's the day Rethuglican morality template Herman "Horndog Herb" Cain is supposed to announce the results from "reassessing" his campaign for the Rethuglican presidential nomination, assuming he's still alive. You see, last night, Horndog Herb was to have met with his wife Gloria to do some 'splainin' about the 13-year-long relationship with Ginger White. Several listeners to the Tom Joyner radio show offered helpful thoughts as to what the first words out of Horndog Herb's mouth might be upon seeing his wife:

"Why are my bags packed?"

But comedian Steve Hofstetter had the best advice: "Admit you are cheating on her and cheat on her again. It seemed to work fine for Newt Gingrich!"

UPDATE: Horndog Herb is "suspending" his campaign... and is still denying all, with his wife standing by him. Also, just announced: "Sucker of the Year" - Gloria Cain.
Posted by W. Hackwhacker at 9:42 AM