A Frothy Mix of Hateful Bullshit 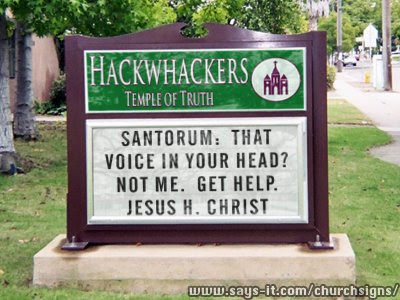 Theocrat Rethuglican loon Rick "Frothy Mix" Santorum lost his last election by 18 points. Ethics issues dogged him in the Senate. He's a well-known homophobic bigot. It's only a measure of how weak and divided the field of candidates is on the Rethuglican side that he's actually leading the Rethug polls in some states. We hope shining light on this ultra-fringe radical will illustrate, because of how far off the deep end his party has gone and how little analysis this has received in the "mainstream" media, how this now passes for Rethuglican normal:

We'll keep shining the light on this loon as he continues to share his divisive, un-American rhetoric.
Posted by W. Hackwhacker at 6:53 AM