... Luckily, no one was there so Willard was the only casualty. (Willard "Millionaire Mitt" Romney hires out Ford Field in Detroit to bore a mere 1,200 one-percenters -- just because he could!) 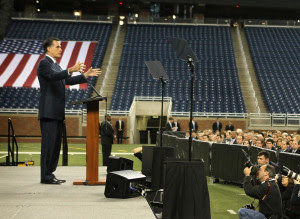 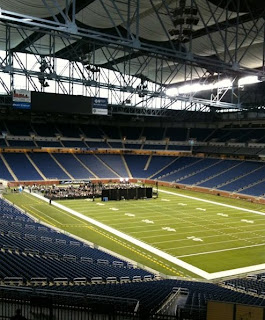 What are those things in the middle of the top photo? They can't be teleprompters! Only the affirmative action Kenyan usurper uses teleprompters!

BONUS: Clueless plutocrat Mittens' only take-away line from the elaborately staged speech, speaking about his wife: "Ann drives a couple of Cadillacs." Hopefully not at the same time.
Posted by W. Hackwhacker at 3:57 PM