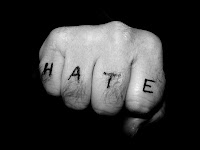 The Southern Poverty Law Center has published a report on the rise of hate organizations and extremist groups, and the statistics for 2011 are sobering. The report counts 1,018 hate groups -- for example, neo-Nazi, skinhead, neo-Confederate, and white nationalist groups -- in the U.S. in 2011. Anti-gay and anti-Muslim groups comprised the largest increases.

Even more shocking are the statistics for right-wing militia/"patriot" groups: there were 149 such groups in 2008, and 1,274 in 2011. The huge increase is attributed to the election of the first African-American President and widespread conspiracy theories about Government seizure of guns, mass internment of citizens, etc. pushed by fringe radicals (and implicitly accepted by far-right Rethuglican politicians like Reps. Crazy Eyes Bachmann and Steve "Man Who Would Be" King). With the rhetoric and positions of the Rethug Presidential candidates moving farther to the right each week, it's only a matter of time when their views overlap those of the most delusional in our society.
Posted by Hackwhackers at 10:58 AM