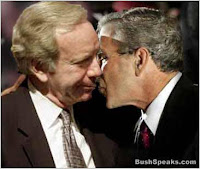 Soon to be ex-Senator Joe "Lieberliar" Lieberman (Likud - CT) is the co-sponsor of a bill that would strip thousands of jobs from the U.S. Postal Service in the coming years. What's especially galling about the piously smarmy Senator's role in this bill is the fact that many returning veterans of the wars in Iraq and Afghanistan for which he was a main cheerleader are employed by the USPS. Here's the basic idea:

"If approved, the Lieberman-Carper-Collins-Brown plan would reduce the amount of money USPS pays annually to prefund the future health-care costs of postal workers, currently set at $5.4 billion annually through 2016....Many of the proposed changes would lead to the loss of hundreds of thousands of postal jobs and future postal workers would enjoy less-generous benefits packages."

So Lieberliar is all for our men and women sacrificing themselves to protect us (and, let's be honest, Lieberliar's main concern Israel), but when they come home, Lieberliar's all "thanks for your service, but you're on your own." Sadly, nothing this weasel does surprises us anymore.

(photo: One of a kind love affair)
Posted by Hackwhackers at 2:57 PM