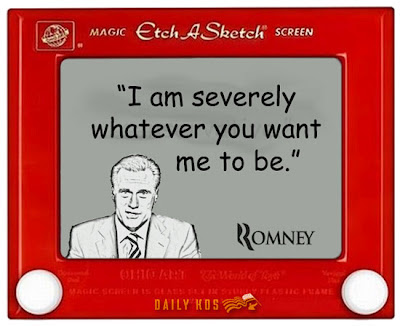 Even the most delusional wingnut has the sense that weird plutocrat and habitual liar Willard "Weathervane" Romney isn't what he claims to be. He won't discuss his record as Governor in Massachusetts because....well, it was a moderate record, comparatively. He doesn't have a good answer to why he claimed he wasn't a "Reagan-Bush Republican" and that he considered himself a pro-choice, pro-gun control independent in the late '80s and early '90s. Instead, he falls back on his corporate record of predatory takeovers, which has its own major problems regarding job creation and profits, but ones which the broken media can't or won't analyze.

We're glad that, once again, a good metaphor has been created to illustrate what an empty, cynical opportunist weird Willard is. He will say anything -- lies included -- to get a vote or two, because he has no core principles that he will stand by.
Posted by Hackwhackers at 1:24 PM