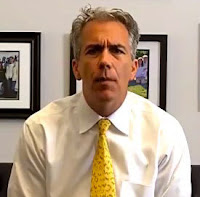 Illinois teabagger favorite Rep. Joe "Deadbeat" Walsh is somewhat infamous for his outrageous comments on the President, his nasty outbursts when confronted by constituents, and his failure to pay child support to his ex-spouse. He's no longer in a safe Rethuglican seat, after redistricting, and he's facing former Congresswoman and Iraq War combat vet Tammy Duckworth for the seat in Congress. Duckworth also served as Assistant Secretary in the Veterans Administration, and is a double amputee. Walsh never served in the Armed Forces, and has all of his limbs, but is lacking decency. His latest stunt was to invite Ms. Duckworth to a town hall meeting when she was fulfilling her obligations as an Army National Guard officer. Hopefully, the good voters of Illinois district 8 will see Deadbeat Walsh for the pathetic sneak that he is. We need the Tammy Duckworths to represent us, not this miserable Deadbeat.