The Fuxers Go All In For Romney 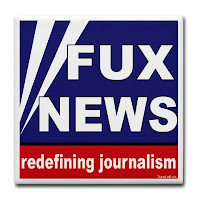 The Rethuglican trio on Fux and Friends thought it would be a good idea to run their own anti-Obama political ad on their program yesterday morning. Even for Fux/GOPTV, it was odd to see such blatant, Rove-like propaganda aired on what claims to be a morning chat show. Right-wing hosts Gretchen "Wretched" Carlson, Steve "The Douche" Doocy, and Brian "Kill Me" Kilmeade added their own two cents worth in support of the Rethuglican message.

Apparently embarrassed by the obvious Rethug cheerleading of their morning trio, Fux executives later issued a statement that the propaganda piece wasn't "authorized" at the proper level in the Fux organization. Maybe Roger "Jabba the Nut" Ailes was out of the office searching for "socialists."
Posted by Hackwhackers at 8:44 AM