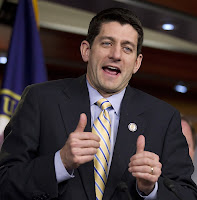 Yesterday, House Rethuglicans passed Rep. Paul "Lyin'" Ryan's (Charlatan-WI) Randian budget, which is dead-on-arrival in the Senate, of course. But as the estimable Charles P. Pierce notes, it does tell us something about the "modern" New Confederate/ Rethuglican Party and its boy genius:

"Which brings us to the 'budget' passed on Thursday by the House. In addition to its being the nocturnal emission at the end of all those nights the teenage Paul Ryan spent playing circus tent under the covers with Atlas Shrugged [ed.- hee-hee], it is constructed specifically to avoid having to make the $55 billion in cuts to the defense department mandated by the debt ceiling deal, a committment, I would argue, that the Republicans never intended to honor, as is obvious from Boehner's statement last March. Rather than agree to those reductions, the Ryan 'budget' does the following:

"5) Drops approximately 300,000 children from school-lunch programs, and eliminates health-care coverage for just about as many.

We and many others have also felt that, in addition to the direct pain involved in these cuts and others targeted to the poor/elderly/sick/vulnerable, Rethuglicans would also reap broader benefits (in their beady eyes): If any of the cuts should happen, these traditionally Democratic constituencies might lose faith in their government and party to protect them, and even if the cuts don't happen, the debate itself feeds a growing cynicism that government can't perform one of its basic missions (i.e., protect the unprotected). That, to these Ayn Rand disciples that run the Rethuglican Party, would be the most important outcome of all.