From the Film Critic's Desk 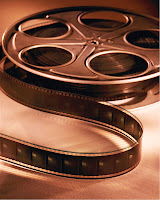 Director Wes Anderson's offbeat films aren't everybody's cup of tea (The Royal Tenenbaums, The Life Aquatic), but if you have a chance to see his new work, Moonrise Kingdom, we think it's worth it. With a quirky ensemble cast ranging from Bill Murray and Bruce Willis, to Tilda Swinton and Harvey Keitel, the film is a whimsical story about two pre-teens finding innocent love in their escapist world circa 1965. The cinematography and fanciful sets distinguish Moonrise Kingdom, as do the two newcomers playing the charming, angst-ridden adolescents, Kara Hayward and Jared Gilman. Don't expect realism or high drama in the storyline or characters, just a humorous and touching 97 minutes of entertainment. Here's a sampling.

Posted by Hackwhackers at 11:16 AM