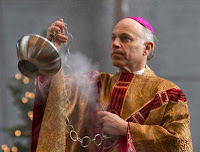 "The Roman Catholic archbishop-elect of San Francisco was arrested for investigation of driving under the influence, San Diego police said Monday.

"The Rev. Salvatore Cordileone, a vigorous supporter of California’s same-sex marriage ban, was taken into custody after being stopped early Saturday at a checkpoint near the San Diego State University campus, said Detective Gary Hassen, a police spokesman. He declined to comment on whether Cordileone took a sobriety test." (our emphasis)

(Photo: Hmmm. Maybe we better see what's burning inside that censer, too.)
Posted by W. Hackwhacker at 3:30 PM