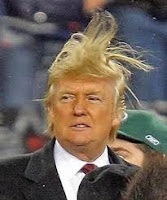 Birther buffoon and hair weave model Donald "Rump" Trump has been dropped from the Rethuglican Convention's compressed schedule, due to Hurricane Isaac's approach. Rump was promising to give a "big surprise" (hint: Mr. Obama, you're fired! Hardy har har.) to the Convention's low-information wing nuts on Monday, and now it looks as though he'll have to save that gem for another day.

Rump and Willard are an odd couple, despite both being born with silver spoons in their mouths. Rump is coarse and thuggish, while Willard is devious and calculating. But, as crass opportunists, they've found common cause in advancing the interests of the one percent over those of the middle class.
Posted by Hackwhackers at 10:50 PM