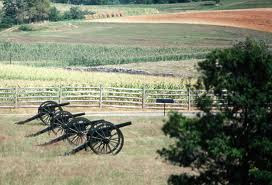 Today marks the 150th anniversary of the bloodiest battle fought on American soil. On September 17, 1862, Robert E. Lee's Army of Northern Virginia and George McClellan's Army of the Potomac engaged in battle near the Maryland town of Sharpsburg and Antietam Creek. Lee was advancing into Maryland with the objective of invading Pennsylvania when a packet of marching orders left behind by his staff were discovered by Union troops scouting the area. After some initial hesitation (as was typical for McClellan), the Union army moved to cut Lee's forces in half at Antietam Creek. The battle raged on from morning to evening.

The battle resulted in about 23,000 casualties, including the lives of some 3,600 soldiers on both sides. One of our favorite songs from the Civil War era is "Tramp, Tramp, Tramp" by George Root, sung here by the Mormon Tabernacle Choir.

Posted by Hackwhackers at 10:45 AM