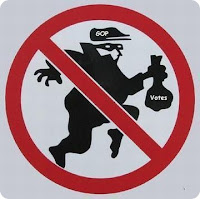 Well well, what do we have here? A Rethug consulting firm hired by the Rethuglican National Committee has been engaged in submitting false voter registration forms to Florida officials. The forms are said to contain the names of deceased citizens and false addresses. You have to give credit to the desperate Rethugs, who are engaged not only in suppressing Democratic votes, but in fraud in adding to their own. The shady Rethug company, Strategic Allied Consulting, also has been active in fraudulently registering Rethug voters in at least five states, so this will get uglier.

We all remember the allegations that the wing nuts raised against ACORN in the 2008 elections, allegations that proved to utterly false and malicious. It appears now as though the Rethugs were engaging in what psychologists would call "projection." Amazingly, one Florida Rethug blind squirrel, Okaloosa Co. board of elections supervisor Paul Lux, has found the nut acorn in this scandal:

“It’s kind of ironic that the dead people they accused ACORN of registering are now being done by the RPOF [Republican Party of Florida].”

Ironic isn't the half of it.
Posted by Hackwhackers at 1:41 PM