Photo Op Of A Phony Campaign 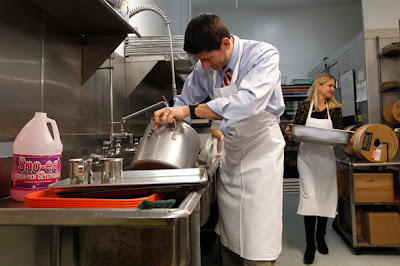 From the Kaplan Daily:


The head of a northeast Ohio charity says that the Romney campaign last week "ramrodded their way" into the group's Youngstown soup kitchen so that GOP vice presidential candidate Paul Ryan could get his picture taken washing dishes in the dining hall. Brian J. Antal, president of the Mahoning County St. Vincent De Paul Society, said that he was not contacted by the Romney campaign ahead of the Saturday morning visit by Ryan, who stopped by the soup kitchen after a town hall at Youngstown State University. "We're a faith-based organization; we are apolitical because the majority of our funding is from private donations," Antal said in a phone interview Monday afternoon. "It's strictly in our bylaws not to do it. They showed up there, and they did not have permission. They got one of the volunteers to open up the doors." He added: "The photo-op they did wasn't even accurate. He did nothing. He just came in here to get his picture taken at the dining hall."

"He did nothing." Yep. That just about sums up what Romney/Ryan/Rethugs will do for the "47 percent," those they consider to be parasites in the world of the "job creators" -- the impoverished, the working poor, the unemployed, the under-employed, the elderly, veterans, people underwater on their mortgages, etc. What a perfect visual metaphor.