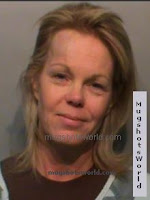 The night after the first Presidential debate, diners at a West Des Moines restaurant were subjected to drunken wing nut Idelle Hunziker haranguing them about how President Obama was destroying the nation and Muslims were to blame. Police were called when she refused to leave the restaurant, and when they arrived the drunken lady woman creature declared that she was a Republican, so they weren't needed. Wonkette has this humorous take on an ugly display of drunken Rethuglican bigotry.

Oh, and she also informed the arresting officer on the way to jail that she was a "good mother," something that was hard to confirm since her daughter left the restaurant saying she was "embarrassed" during her mother's tirade.

(photo: West Des Moines' Mom of the Year. We'll drink to that.)
Posted by Hackwhackers at 10:28 AM