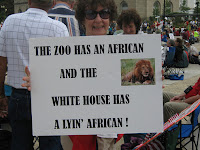 John Avlon has an interesting, and very disturbing, survey of the scores of vile Obama-hating screeds that have been published in book form in recent years. Avlon's whole "review" is worth a look because it serves to remind us how un-hinged and radical the far-right New Confederate/Rethuglican party and its shills have become. Beyond hate radio and Fox "News" spewing lies and misinformation about the President and his administration, there's a fairly healthy cottage industry of these fact-free, paranoid "Tales of Barack Hussein Obama, Scary Socialist Black Man." Here's a fragment of Avlon's piece:


"Over the past four years, no less than 89 obsessively anti-Obama books have been published, as now catalogued by The Daily Beast. I’m not talking about cool statements of policy difference, but overheated and often unhinged screeds painting a picture of the president as a dangerous radical hell-bent on undermining the Republic by any means necessary. It is hate and hyper-partisan paranoia masquerading as high-minded patriotism.

"Here’s the worst part—this steady drumbeat of incitement is having an impact on this presidential election because it has poisoned the well of civic discourse for many voters and those in their radius of damage. It has helped divide the nation beyond reason, distorting the president’s real record beyond all recognition."

Photo: We're sure she's read all of those books - at least we think she can read.