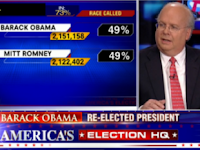 A lot has been made of the supposedly skewed poll numbers that most major polling organizations showed during the last month of the campaign. Rethug-friendly pollsters convinced Willard "Not-President" Romney and his campaign that the election was in the bag for them. Their allies smeared New York Times' brilliant Nate Silver's projections which showed a small, steady Obama lead for weeks and were ultimately right on target, despite the punditry to the contrary. In so many ways, the math of the election -- from bogus budget claims to their poll numbers -- never worked for Not-President Romney's campaign.

Perhaps the biggest loser last Tuesday was political hack Karl "Turdblossom" Rove, who blew through hundreds of millions of dollars contributed by right wing fat cats hoping to purchase the Federal Government. As we noted yesterday, there's some serious anger among those fat cats this week, who want to know why their vast sums of payola didn't produce the results that Turdblossom clearly promised. His meltdown on Fux News on election night is a political classic -- waving numbers around, initially hubristic, then skeptical, then defensive, then defeated. He's full of excuses now, and Talking Points Memo has them catalogued. None of them hold much water at all, and his statement that the Obama campaign "suppressed the vote" by painting Willard as an out-of-touch plutocrat is an example of projection, given the Rethugs' failed attempt to actually suppress Democratic constituencies in several states.

As they say, "denial" isn't just a river in Egypt. It's a stage of grief that Turdblossom has entered, and he -- and his party -- may not emerge from it anytime soon.

(photo: The meltdown begins.)
Posted by Hackwhackers at 9:29 AM