Come Together, Right Now, Over Me 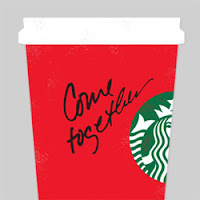 Many of us in the Washington, D.C., area have heard or read of the Starbucks PR stunt campaign using the message "Come Together" written by its employees on coffee cups to urge a fiscal cliff deal. The stunt campaign contains an implicit sentiment: all that's missing in today's political climate is the spirit of compromise and accommodation ("Can't we all just get along?"). Ezra Klein has an analysis and a better idea:


I don’t think you can look at the last three years and say the White House hasn’t tried to come together with the Republicans.

I also don’t think you can look at the last three years and say the Republicans have tried to come together with the White House.

The check on that sort of behavior is blame. If Republicans are being intransigent and the American people want compromise, then, in theory, the Republicans will get blamed. And that does seem to be happening: The GOP polls terribly, and they lost the 2012 election.

But at the elite level — which encompasses everyone from CEOs to media professionals — there’s a desire to keep up good relations on both sides of the aisle. And so it’s safer, when things are going wrong, to offer an anodyne criticism that offends nobody — “both sides should come together!” — then to actually blame one side or the other. It’s a way to be angry about Washington’s failure without alienating anyone powerful. That goes doubly for commercial actors, like Starbucks, that need to sell coffee to both Republicans and Democrats.

That breaks the system. It hurts the basic mechanism of accountability, which is the public’s ability to apportion blame. If one side’s intransigence will lead to both sides getting blamed, then it makes perfect sense to be intransigent: You’ll get all the benefits and only half the blame.

The two parties are not equivalent right now. The two sides are not the same. If you want Washington to come together, you need to make it painful for those who are breaking it apart. Telling both sides to come together when it’s predominantly one side breaking the negotiations apart actually makes it easier on those who’re refusing to compromise.

Maybe if Starbucks were truly interested in "solving the mess in Washington," it could get its employees to write a different message on its over-priced coffees: "It's The Republicans, Stupid."

UPDATE: President Obama appeared on Sunday talk shows today to emphasize that he's met the Rethugs more than half way, and that the press needs to stop playing the "both sides are to blame" card when it's clear that the Rethugs haven't absorbed the message from the election.

UPDATE II: As Paul Krugman points out, Starbucks compounds the problem by directing people to a web site with a well-known austerity agenda.
Posted by W. Hackwhacker at 10:02 AM