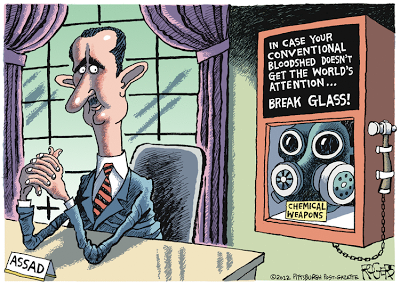 Syrian tyrant Bashar Assad is contemplating the use of sarin gas against the uprising of the Syrian people, which has already claimed thousands of lives. The Syrian armed forces are reportedly preparing their munitions for the use of deadly poison gas. President Obama has called the use of this WMD as the "red line" that could bring U.S. military intervention, but Assad is apparently calculating that he's running out of options to hold on to power. Russia is a key player, as Syria's arms supplier and prominent ally, but it's hard to imagine Russia standing by while their client uses WMD against its citizens.

Posted by Hackwhackers at 9:13 AM