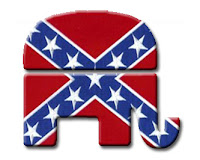 The Virginia State Senate is split evenly 20 - 20 between Dems and Rethugs...at least for now. Yesterday, while 79 year-old African-American State Sen. Henry Marsh was attending President Obama's historic second inauguration, the Rethuglican Senators, having a temporary one vote majority, rammed through a redistricting bill that would give them greater advantages, and likely cost one Democratic State Senator his job.

From playing with voter suppression laws to gerrymandering districts to their advantage, the Rethuglicans in State legislatures are hoping to achieve what they can't seem to win at the ballot box. It's symbolic of their deep anti-democratic, authoritarian make-up, and it should anger all Americans who believe in fair play and justice.
Posted by Hackwhackers at 8:21 AM