Americans Think Republicans Are Out of Touch, Partisan 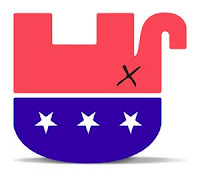 As we lumber toward sequestration, these polls should be a wake-up call to the Rethuglican leadership (if only they weren't paralyzed by fear of their foaming- at- the- mouth- base):


"Sixty-two percent of adults say the GOP is out of touch with the American people, 56 percent say it’s not open to change and 52 percent say it’s too extreme, according to a Pew Research Center poll released Tuesday." (our emphasis)

"With the automatic across-the-board spending cuts set to begin on Friday, Americans are split over whether President Barack Obama is emphasizing unifying the country or taking a partisan approach, according to a new NBC News/Wall Street Journal poll.

"But by nearly a 3-to-1 margin, respondents conclude that the Republican Party is emphasizing partisanship more than unity."  (our emphasis)

Today's case in point:  The Senate finally confirmed former Republican Senator Chuck Hagel to be Secretary of Defense by a vote of 58-41, with all but 4 Rethuglicans voting against Hagel.
Posted by W. Hackwhacker at 5:21 PM