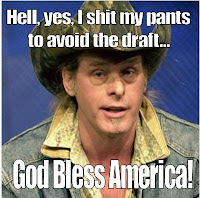 In the audience at tonight's State of the Union address will be far-right sociopath Ted "I Pooped And Peed My Pants" Nugent, courtesy of fellow sociopath Rep. Steve "My Gun Is My Manhhod" Stockman (NRA Crackpot-Tex-ass). Stockman had this to say of his invite to Nugent:


“I am excited to have a patriot like Ted Nugent joining me in the House Chamber to hear from President Obama."

"Patriot" Nugent has a long history of violent anti-government, pro-gun, anti-Obama, actions and pronouncements (causing at least one sit-down with the Secret Service), and is often seen on GOP-TV Fox "News" and at NRA conventions spouting his hate speech. (Infamously, though, this Rethuglican chickenhawk "patriot" went to disgusting lengths to avoid the draft during the Vietnam War era.) Nugent has promised both pre- and post-SOTU commentary, which should serve to provide a stark contrast between his gun-crazy Rethuglican / New Confederate/ Stupid Party and sensible gun-control Democrats, especially since several families of the Newtown massacre victims will also be present as guests for the SOTU. This is precisely the problem establishment Rethugs are going to have going forward in trying to re-brand their party: there are just way too many of their lunatics to hide from public view.
Posted by W. Hackwhacker at 10:23 AM