A Budget That Billionaires Would Love 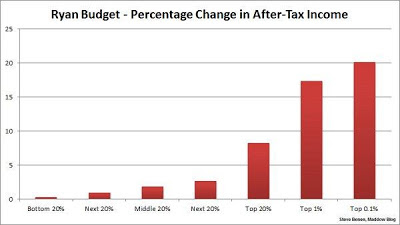 We've been referring to the 2014 budget proposal offered by tea bagger favorite Rep. Paul "Lyin'" Ryan as a "reverse-Robin Hood" scheme.  Thanks to Steve Benen at the MaddowBlog, here's visual proof that the after-tax income of the very wealthiest Americans would see huge increases, while people in the bottom 80% would see very little.  One would think that trickle down economics had been completely discredited over the last 30 years, but one would be wrong, since Lyin's budget is treated in the Beltway bubble by Very Serious People as tough, but credible.

BONUS:  Josh Barro at Bloomberg tells us why it's "Paul Ryan vs. the Middle Class."

BONUS II:  Noam Scheiber tells us why the media may finally be onto Paul Ryan.
Posted by Hackwhackers at 1:22 PM