We Don't Need No Stinkin' Regula...BOOM 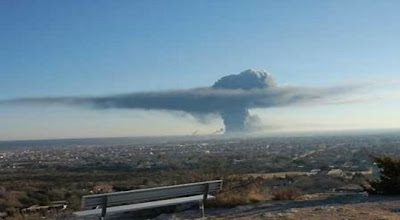 It's being reported that the plant in West, Texas that exploded on Wednesday had 270 tons of ammonium nitrate, more than 1,300 times above the legal limit that requires disclosure to the Department of Homeland Security (DHS).  The explosion killed 14 and injured many more, flattening homes and doing extensive damage to the surrounding area.  Ammonium nitrate was the material used in the Oklahoma City bombing and, decades ago, the bombing of the University of Wisconsin's Army Math Research Center.  Amounts over 400 pounds are to be reported to DHS due to the material's past use in bomb making. Amazingly, not only did the plant fail to report its massive amount of ammonium nitrate, the DHS was apparently unaware of the plant's existence.   Don't mess with Texas, indeed.

(No, that's not a North Korean atomic bomb exploding;  it's the West, Texas fertilizer plant going up.)
Posted by Hackwhackers at 8:38 AM