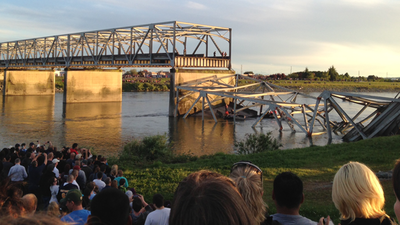 Yesterday's collapse of the Skagit River bridge carrying I-5 traffic between Seattle and Vancouver may have been caused by a tractor trailer hitting part of the bridge.  Usually, if a major, four-lane bridge is sound structurally, it would take more than a truck to bring it down.  This particular bridge was rated "functionally obsolete" by the Federal Highway Administration, but it hadn't been inspected in several years, so it may have had unreported flaws that caused it to collapse after the truck's impact.  Fortunately, there have been no fatalities reported.

Inspection, repair and replacement of our bridges, tunnels, roads and ports should be a no-brainer for Congressional appropriations.  It puts perhaps hundreds of thousands to work, not just on the infrastructure itself, but for suppliers of cement, asphalt, heavy equipment, etc.  Of course, the main stumbling block is the Rethuglican obsession with denying any success to the Obama Administration, even at the cost of jobs and perhaps even lives -- not this time, but when?

(photo: Emerson Shotwell, via KSPR)
Posted by Hackwhackers at 11:20 AM