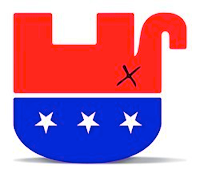 We had to laugh when we saw this story about the Rethuglican National Committee's head of Hispanic Outreach in Florida quitting his post, and changing his party affiliation to Democratic.  Bwhahaha!  Apparently, Pablo Pantoja had enough of Rethug reactionary racism over the immigration issue, writing in an open letter:


"It doesn’t take much to see the culture of intolerance surrounding the Republican Party today. I have wondered before about the seemingly harsh undertones about immigrants and others. Look no further; a well-known organization recently confirms the intolerance of that which seems different or strange to them."

The last statement refers to the Heritage Foundation's bigoted "study" claiming that Hispanic immigrants were too intellectually inferior and would cost too much to justify accepting them into the U.S.  The creep that authored the "study" ended up resigning, but not before the Heritage Foundation exposed itself for the right-wing nativist operation that it is.
Posted by Hackwhackers at 2:51 PM