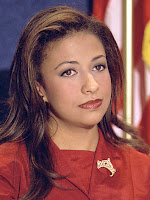 After their flop in 2012, the Rethuglican Party has claimed to be seeking a more inclusive approach to minority and women voters.  They've certainly tried to cosmetically put their craven politicians at the forefront of such debates as immigration reform (Sen. Marco "Glug Glug" Rubio) and women's reproductive rights (Rep. Marsha "Man's World" Blackburn).

It looks like their rebranding efforts have run into a bit of a snag again.  Erika Harold is a black female, the 2003 Miss America winner and a Harvard Law School graduate.  She's a Rethuglican running against Rethug incumbent Rep. Rodney Davis in the primary, and that's made some ol' boys in the Montgomery Co. (IL) Rethuglican Party angry, especially their county chairman Jim "Jim Crow"Allen, who wrote this lovely missive:


"Rodney Davis will win and the love child of the D.N.C. will be back in Shitcago by May of 2014 working for some law firm that needs to meet their quota for minority hires... Now, miss queen is being used like a street walker and her pimps are the DEMOCRAT PARTY and RINO REPUBLICANS."

We suppose he's angry because his white hood and sheets came back from the cleaners with wrinkles. This is the quintessential teabagging Rethug these days: deranged, angry, racist, and misogynist. They need to be kept as far away from the levers of power as we can keep them.  Oh, and Ms. Harold, what the f*ck are you thinking running with these s.o.b.'s?

UPDATE:  Apparently, Allen was too much even for the Rethug Party:  he's been forced to resign.

(photo:  Waiting for the Rethug welcome mat)
Posted by Hackwhackers at 12:32 PM

And why would she choose that photo? She looks like she is lost in some dreamworld - oh, right, the republican party.

Dream on, Ms. Harold, dream on. Thanks for commenting.