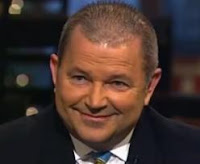 As to the future of America – and the collapse of this once-Christian nation – Christians must not only be allowed to have opinions, but politically, Christians must be retrained to war for the Soul of America and quit believing the fabricated whopper of the “Separation of Church and State,” the lie repeated ad nauseum by the left and liberals to keep Christian America – the moral majority – from imposing moral government on pagan public schools, pagan higher learning and pagan media. Bill Bennett’s insight, “… the two essential questions Plato posed as: Who teaches the children, and what do we teach them?” requires deep thought, soul-searching and a response from Christian America to the secular, politically correct and multicultural false gods imposing their religion on America’s children. [our emphasis]

One need only view the crackpottery at the recent Ralph Reed circle jerk "Faith and Freedumb Coalition Conference" (see below) to realize how close we may be to having the David Lanes of America imposing their religion (a wholly unrecognizable, medieval Christianity) on the rest of us.  The best way to think of Lane's philosophy is, "Christian Sharia Law."

To think that this wanker is advising someone who, albeit fancifully, is being yakked about among the Beltway media numbnuts as a potential Rethuglican presidential nominee in 2016, should send chills up every thinking person's spine.
Posted by W. Hackwhacker at 9:44 AM