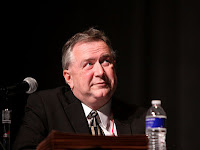 Among the most entitled, soulless Congressmen of the Rethuglican/ New Confederate/ Stupid Party (and Lord, there are so many) is NRA stooge  Rep. Steve "My Gun is My Manhood" Stockman (Guns!- TX).  But Stockman isn't a one trick pony, no suh!  Responding to a demonstration by House Democrats that cutting the Supplemental Nutrition Assistance Program's (SNAP) budget by $21 billion over 10 years would cause people already subsisting on a tight food budget to suffer even more, Stockman sent his communications buttboy Dim Donny Ferguson out to the stupidmarket to buy some food and show them liebruls!  Here's what Dim Donny bought for his allowance (via Stockman's office - no link):


For $21.55 Ferguson purchased at Dollar Tree:
Two boxes of Honeycomb cereal
Three cans of red beans and rice
Jar of peanut butter
Bottle of grape jelly
Loaf of whole wheat bread
Two cans of refried beans
Box of spaghetti
Large can of pasta sauce
Two liters of root beer
Large box of popsicles
24 servings of Wyler’s fruit drink mix
Eight cups of applesauce
Bag of pinto beans
Bag of rice
Bag of cookies
For $6.03 at the Shoppers Food Warehouse next door Ferguson bought a gallon of milk and a box of maple and brown sugar oatmeal.

Mmmm. Yum!  We never realized the poors had it so good... or as Laura Clawson points out:


So he's got a lot of cereal for breakfast, and he can have peanut butter and jelly sandwiches for lunch, along with maybe some applesauce and fruit drink. For dinner, it looks like he's eating spaghetti for a couple nights and otherwise eating beans and rice. Also popsicles and cookies. Healthy diet, there! And such a varied menu at dinner. Perhaps Ferguson isn't aware that the definition of low food security is "reports of reduced quality, variety, or desirability of diet. Little or no indication of reduced food intake." Exactly the diet he's reporting, in other words: fruits and vegetables only in the form of grape jelly, pasta sauce, and applesauce, heavily dependent on root beer and cookies and sugary cereal for calories, and beans and rice night after night for dinner. Not to mention the increased health care costs we can expect to see as a result of people living on diets like this and developing diabetes, hypertension, and a series of other health problems.

Right.  Not surprisingly, Stockman whiffed on the point of the Democrats' demonstration, i.e., that you can't have a healthy diet on the subsistence-level assistance, much less if it's pared back over the next 10 years.  Sure, you can eat (and it looks like Stockman does quite well by himself in that category), but you're loading up on sugars and other empty calories.  But "not starving" isn't supposed to be the yardstick we use in this country, is it?
Posted by W. Hackwhacker at 3:39 PM