All Together Now, Benghazi BENGHAZI! 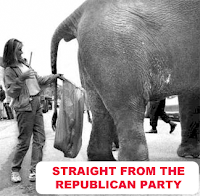 Having failed to generate any movement over the so-called IRS "scandal," extreme wingnut Congresscritters are turning to their Rethuglican leadership in the House to establish a special committee to "investigate"....you guessed it....Benghazi! BENGHAZI!!  Led by uber-wingnut Rep. Steve "Out of Stock" Stockman (Tinfoil Hat - TX), bitter enders in the House are gathering signatures to force a discharge petition and an up or down vote on establishing the committee.  They need a simple majority of 218, but have only collected roughly 160.

Instead of focusing on the needs of the American people, the Rethug wingers continue to politicize everything they see (or imagine).   Remember last November when they ran on the economy and jobs? Now it's attempted scandal-generation and their war on women.
Posted by Hackwhackers at 11:08 AM