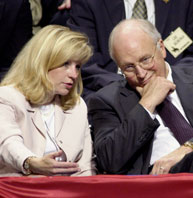 The announcement by bad seed and knife fighter Liz "Lizard" Cheney that she will run for the Rethug Senate nomination in Wyoming against incumbent Rethug Sen. Mike "Bitter" Enzi has prompted some anguish on the far right, much to our delight.  The Bitter Enzi's no stranger to radical right wing politics, and is one of the most conservative members of the Senate.  He's also backed by his colleagues in the Wyoming delegation, and by the National Rethuglican Senatorial Committee.

Lizard is one nasty customer, as this rundown in Think Progress illustrates.  In almost every pronouncement of hers, she gets personal and often in a vicious way (Daddy's little girl).  Yesterday, she used the word "confused" to describe 69 year-old Bitter Enzi when he claimed that she promised not to run if he ran for reelection, implying that the incumbent is too old and muddle-headed.  She's also hoping that voters will forget that she's spent most of her life living in Northern Virginia.

While we believe Wyoming Rethuglicans will see Lizard as the cynical, opportunistic player that she is and ultimately reject her bid, this will be fun to watch.  Get the popcorn ready.

(photo:  The American Borgias spinning another intrigue.)
Posted by Hackwhackers at 10:58 AM