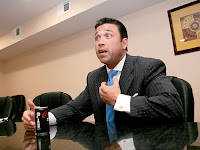 
Today, I decided to withdraw my support from President Obama’s proposal for a military strike against Syria. I have heard from many of you in Staten Island and Brooklyn, and it is clear to me that their is strong opposition to the strike. As your voice in Washington, I will continue to listen and take a stand for you.

Will you stand with me in opposing President Obama’s plan with a donation of $25 or more right now?  (our emphasis)

Apparently, after taking the temperature of his district, Rep. Grimm did the only honorable thing... and decided to make a buck off his flip-flop. It's giants like him that are running the nut factory otherwise known as Congress.

It's also why we can't have nice things in this country.

(Photo:  Rep. Michael Grimm:  "Can you send me some moneez to oppose President Obama, whom I supported yesterday?  Pleeze?")
Posted by W. Hackwhacker at 3:04 PM