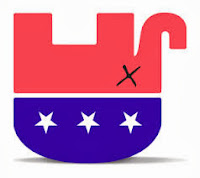 We noted yesterday that wide cracks are appearing in the Rethuglican facade over the Government shutdown and their threats to default on the debt.  As meetings between House Dems and Rethugs might signal some movement toward an endgame, the perpetrators of this extortion are beginning to duck for cover.  With Wall Street signaling that they've had enough of the pointless hostage-taking by the teabaggers, even the notorious Kochs are disavowing their role in linking the shutdown with attempts to defund the Affordable Care Act.  Oh, and the public opinion of the Rethugs?  Only 28 percent have a favorable view of the party, lowest since measuring began 21 years ago.

Now, the 2008 Rethuglican Presidential nominee and bitter dude Sen. John "Grampypants" McCain is blaming the teabagger forces for the debacle.  He and other traditional conservatives are seeing the unraveling of their party thanks to the far-right, no compromise, burn-it-down, racist birthers that make up the hardcore voting base of the Rethuglican/New Confederate Party.  It can't unravel fast enough for the sake of our democracy.
Posted by Hackwhackers at 10:51 AM