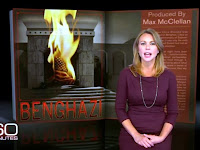 CBS News President Jeff Fager announced today that "60 Minutes" contributor and home wrecker Lara "Lara Croft" Logan, along with her producer Max "Maxed Out" McClellan, have been asked to take a "leave of absence" from CBS News after the false report that they aired on the Benghazi attack.  An internal CBS investigation takes Logan to task for not employing the full reporting resources of CBS News to determine that the story that they ran with on October 27 was bogus. Do tell.

The summary of the investigation does address the fact that a CBS subsidiary -- "Threshold Editions" -- was publishing the false claims that aired on "60 Minutes" (indicating a financial conflict of interest), and that Logan's vocal  bias regarding the handling of the Benghazi incident, and what the U.S. should do to retaliate, violated CBS News Standards.

No word on how long Lara Croft Logan and Maxed Out will be absent, but in any event we're happy to say, "buh bye" for now.