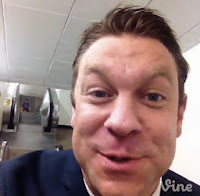 In what could be a real... blow to his family values image,


... freshman GOP Rep. Trey Radel, who represents Florida's 19th Congressional District, was arrested late last month in Washington, D.C. for possession of cocaine. He's due in court tomorrow, but so far, there are no further details about how Radel was nabbed or how much of the white stuff he had on him, though he's apparently been charged with a misdemeanor.

From his campaign web site:

Outside of radio, Radel ran a Media Relations company that focused on advancing conservative causes.  Radel says, “I have fought for and will continue to fight for lower taxes, less government and more freedom.” (our emphasis)

An ex-Fox "News" "journalist" and hate radio jockey, huh.  We wouldn't have thought he could sink any lower than that.

Expect the good hypocrite to tearfully announce (with family surrounding him) he's going to rehab, blah, blah, etc. etc., and ask for his family and knuckle-dragging constituents to forgive him.  Because (quoting Radel) "more freedom!"